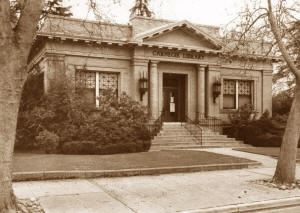 Lodi has been fortunate to have its own city library since October 1885, when a group of ambitious Lodi residents, including Congressman J.A. Louttit, Ben Langford, and Ross Sargent, established one for an initial investment of $1,500. Their original nest egg was supplemented from time to time by benefit events and donations.

Over time the library collection dwindled but was revived in 1901 when librarian Harvey Clark took charge. The ongoing support of the library was provided through annual dues levied on the members of the Lodi Library Association.

In 1908, the library began to receive regular contributions from the City of Lodi and became a free public library. During the same year, a movement to finance construction of a library building got underway. The City secured $10,000 from the Carnegie Foundation and the library's first home was erected on Pine Street next to the present City Hall. In 1928, the city spent $36,382 on improvements and additions to that building.

In 1979 the library moved to its present location on Locust Street, a nearly 30,000 square foot library that served the needs of the community for more than 30 years. The old library was converted to its current use as the Council Chambers for the City.

The new building served its community well for many decades, though around 2005 significant improvements were needed to restore and rehabilitate a building that has been in continual use by its citizens. Accordingly, the Lodi Board of Trustees, the Lodi Public Library Foundation, the Friends of the Library, and Staff initiated plans to renovate the library, culminating in a multi-million dollar renovation that resulted in 6 more meeting/study rooms, significantly more access to computers and other technology, and new paint, carpets, and other ascetics to repair and rehabilitate the 35-year-old building.

The Future of the Library

And so, today, we turn our attention to the Library of the future. In the coming year, the Lodi Library will initiate a comprehensive review of our Library collection, assessing what areas we have purchased too many books and what areas we have not purchased enough, and where future Library materials monies should be spent. We will be dramatically increasing the number of smartpads we will be offering the public, and we aim to expand the number of computer courses we offer the public.

This Library will revisit our eBook/online book collection, computerize our new Library card request system, expand our Spanish storytime program, and search for additional database and reference materials to broaden the knowledge base of students and adults alike, and renew efforts to create an endowment to support our highly respected literacy programs.

Through all these efforts, we are not only maintaining a Library so today’s youth and adults can work towards a better future, but creating a Library for tomorrow that motivates its citizens to learn, encourages them to explore, and inspires them to act. It is a journey for the ages, one that this Library - through the efforts of so many - is determined to achieve.