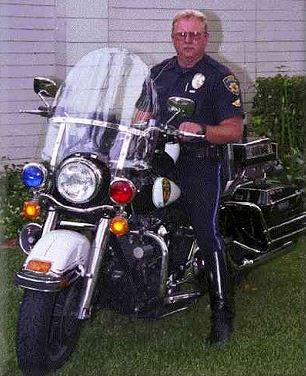 Rick Charles Cromwell, a City of Lodi police officer, died as a result of a motorcycle collision that occurred on Kettleman Lane while on-duty on December 9, 1998. He was 35 years old.

Rick is missed as a son, as a husband, as a father, as a police officer, and as a friend.

He was hired by the City of Lodi in August 1988. Rick was a patrol officer for about five years when he was transferred to the Traffic Unit as a motorcycle enforcement officer, the job he was performing when his accident occurred.

Rick was an expert motorcycle rider and was a state-certified instructor for teaching riding skills to other police officers to prepare them for motorcycle assignments. He was very concerned with motorcycle maintenance, and he took it upon himself to be the lead officer in charge of the maintenance of the entire fleet of police motorcycles.

Rick was trained in the field of collision reconstruction. He was a court-certified expert in this field and was frequently called upon to consult on all serious collisions in Lodi and for other police agencies. Rick was a critical member of the police department's Major Accident Investigation Team; and was considered to have a special talent of being able to determine the actual chain of events that caused the collision to occur.

He was born in Lodi and went to local schools. He graduated from the Lodi Academy in 1981 and earned a Bachelor of Science degree in Computer Technology from DeVry School of Industry in Arizona.